Davis Legacy Partners With California Storm and joins the wpsl

Davis Legacy Soccer Club and Women’s Premier Soccer League (WPSL) club California Storm have teamed up with the goal of providing the best soccer environment and development opportunities for members of both organizations. 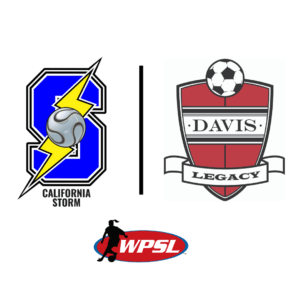 “We are excited to partner with such a quality club that has a similar mission and values as ours,” said California Storm Executive Director Jamie Levoy. “ Both of our organizations want to empower girls and women, and Davis legacy has a professional leadership team and the best soccer facilities in Northern California. This partnership will allow us to create more opportunities for female athletes.”

David Robertson, Executive Director for Davis Legacy, said about the partnership, “We very are excited to embark on this relationship with the Storm and provide a pathway for women players who want to pursue high-level playing opportunities whilst in their senior years of club soccer, through college and beyond. This coincides with our club’s goal of developing and providing lifetime soccer opportunities and fulfills one of the objectives of our strategic plan of having both a mens and womens soccer program available to our members.  We are honoured to be affiliated with such a well respected organization both here in California and throughout the Country.”

The California Storm of the Women’s Premier Soccer League (WPSL) is Sacramento’s premiere women’s soccer club. Their mission is to inspire and empower girls by building self-confidence and leadership skills through the game of soccer. California Storm players come from many different backgrounds including amateur college standouts to former national team players to world-wide recognized professional players. From Ghana to Greece, international players from around the world seek a position with the California Storm. The Storm storied roster has included FIFA third best in the world all-time ranked player and Brazilian star Sissi to World Cup and U.S. National Team World Champions Brandi Chastain, Alex Morgan, Leslie Osborne and Julie Foudy.

Outstanding college and post-collegiate athletes continue to choose the California Storm, year after year, to stay in shape and to build on their current skills. This has included standout female college soccer players from Stanford, Santa Clara University, Cal, UC Davis and Sacramento State to name a few. The WPSL is the world’s largest women’s soccer league with more than 100 clubs as it enters its 22nd season in 2020.