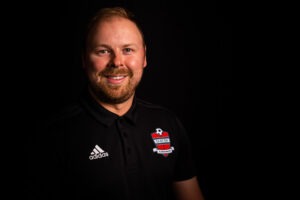 I was the head coach of the 14s age group within the club. I am responsible for planning and delivery of sessions three times per week, which challenge the players both technically and tactically to increase their ability and understanding of the game. I also coach the players on Sundays for games against other initiative level clubs on a weekly basis.

Scottish FA Community Coach (March 2010 – June 2015)
I am involved with the delivery of fun and progressive football sessions to various age groups (Ages 5-14) throughout Edinburgh in various primary/ high schools and community centers. Each session is aimed at developing players technical ability within a fun and safe environment. Additionally, I run the Edinburgh region Advanced Player Development Centre, which is a weekly session with the most advanced players from 10-14 in the Edinburgh area.

Scottish FA 2020 Development Centre Coach (August 2012 – June 2014)
I was involved in assisting and delivering this program within Edinburgh. This program was created to develop the elite primary seven pupils (11-12-year-olds) in the area with an aim to progress onto the performance school the following year. This was a weekly session, with the main aim to develop the player’s individual technical ability. Regular assessments were carried out along with each player given homework cards to increase the number of hours they were practicing.

Professional footballer for Hibernian FC in Scottish Premier League. Captained under 19 team to Scottish League and Scottish Cup double. First team in league outside of Rangers and Celtic to do so.